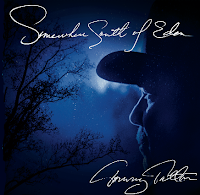 Tommy Talton
Somewhere South of Eden
(Indie)
I have been a fan of Tommy Talton since his days with Cowboy back during the seventies. The Capricorn Records recording band was among my Top- Ten favorite bands of the decade, along with The Allman Brothers Band and the Marshall Tucker Band, and their song “Please Be with Me” remains one of my favorite songs to this very day.
When Tommy Talton began releasing a string of solo albums, I was always first in line to hear his new music. It was never disappointing, ever. With Somewhere South of Eden, Talton ups the ante. This is one of his best efforts yet, from the beautiful and melodic title track to the mesmerizing “When I Fall Asleep Again.” I remember hearing the latter on a demo several years ago, and falling in love with the song back then. Tommy has a way of delivering a ballad that is unparalleled.
On Somewhere South of Eden, Talton plays all of the guitar parts and handles vocals, accompanied by drummer Bryan Owings [Tony Joe White, Buddy Miller, Emmy Lou Harris] and bassist Chris Donohue [Emmy Lou Harris, Lucinda Williams, Alison Krauss]. The basic tracks were recorded by David Pinkston, in Hendersonville, Tn.
Other all-star players include keyboardists Chuck Leavell [Rolling Stones, Eric Clapton, Allman Bros.]; Spooner Oldham [Muscle Shoals “Swamper”]; Ike Stubblefield [Motown star organist]; Steve Conn [singer-songwriter, Sonny Landreth, Bonnie Raitt]; John Ginty [soloist and organist with Dixie Chicks]; Kenny Head [John Barry, Georgia Satellites, Tommy Talton Band]; along with Jeff Mosier on banjo, [Blueground Undergrass, Col. Bruce Hampton]. Friends Randall Bramblett [Cowboy, Sea Level] and Tom Ryan [Shawn Mullins] add saxophones. Vocalist Deborah Reece adds soulful harmonies to three of the tracks here, Markham White [engineer/mixer for the album] adds guitar parts on two of the tracks.
The album gets underway with a rocking “I Can’t Believe it,” fueled by horns and a celebratory lyric and featuring a smooth sax solo from Randall Bramblett. “Hard Situation” is a heartfelt blues that is enhanced by the accordion mastery of Steve Conn. Chuck Leavell – probably my all-time favorite pianist-  adds piano on “Poblano,” an excellent instrumental that hints at Carlos Santana one minute and Dickey Betts the next. It’s a wonderful guitar song, enhanced by the drumming of David Keith.
Jeff Mosier brings banjo and vocals to the hoedown of “Don’t Go Away,” a true bluegrass surprise that really works well. Kenny Head plays piano on Its Gonna Come Down on You,” a song that features some mighty nice acoustic guitar as well as a rocking electric lead.
The star power continues with “I Surrender,” a great song about the aftermath of a break up, and the feeling of just giving up and giving in. Tommy brings in more legends, Ike Stubblefield on organ and Spooner Oldham on Wurlitzer piano. Now how much would you pay?
“Waiting On the Saints” is a serious groove that is meant to be played loud. Turn it up to eleven. It’s a goodie. And as I said in the beginning, the title track, “Somewhere South of Eden,” is another of Tommy’s beautiful ballads, with crying slide guitar and lyrics that could have easily been penned by Bob Dylan. This one is one of my favorite tracks on the release, eclipsed only by the aforementioned “When I Fall Asleep Again.”
Throughout all of the songs Talton’s guitar is front and center, shining through like a beacon, whether he is playing electric or acoustic or slide, as on “We Are Calling,” a song on which the slide is the star. Simply astounding.
After half a century of playing, from We The People to Cowboy to his solo band, Tommy Talton is still making music that is both viable and extremely enjoyable. Talton continues to age like the finest wine. Drink him in.

Posted by Michael Buffalo Smith at 8:52 AM

Michael Buffalo Smith
I am a lover of music, film and books. KUDZOO is my blog site (not to be confused with our magazine of the same name.) I am a professional writer and author (and sometimes musician) and I will be writing about whatever crosses my oftentimes bizarre mind, including all of the subjects featured in both KUDZOO and formerly in GRITZ Magazines- music of all types, reviews, interviews, movie reviews, comic books, real books, commentary, afterthoughts, dreams, chicken beaks, food, beer, wine, restaurant reviews, travel diaries - pretty much the skies the limit! I truly hope you will subscribe and please feel free to comment. The only reason I approve the comments before publishing is to weed out the small number of evil, vicious, mean and nasty spammers. We will have none of that here please. And no running with scissors! KUDZOO Blog https://kudzooblog.blogspot.com/ Also visit My Movie Review Blog! https://buffalodoublewide.blogspot.com/ KUDZOO Magazine http://www.kudzoomag.com